skip to main | skip to sidebar

As all of you can tell I haven't been good about getting new blogs up for some time.  Therefore, I'm turning over the WSM blog to Chris Gallina, a student at Cal State Fullerton.   If your a member of WSM please send Chris something he can post on this blog.  Do you have a new paper out; described a new species; have a specimen you can't identify; done something interesting this summer.  Send a note and picture to Chris and he'll get it up on the web for you.  This blog is only as good as its submissions — so please start submitting.

Thank you for your interest in the 2011 International Malacology Reunion, the upcoming joint of the 44th annual meeting of the Western Society of Malacologists and the 12th biannual meeting of the Mexican Malacological Society to be held at the Centro Interdisciplinario de Ciencias Marinas of Instituto Politecnico Nacional on the Madre Perla Conference Room of the Hotel Perla, La Paz, Baja California Sur, Mexico.

The joint meetings of these two societies increased the number of contributed presentations and broaden the scientific communication between our two countries. The 2011 International Malacology Reunion will present a workshop on 'Bivalve taxonomy' by Dr. Paul Valentich.Scott (Santa Barbara Natural History Museum), and a symposium on the 'History of Malacology in Baja California' convened by Dr. Hans Bertsch (Instituto de Investigaciones Oceanológicas de la UABC). The meeting will be filled with 72 oral presentations and 67 posters dealing with molluscan ecology, systematics and phylogeny, paleontology, anthropology, aquaculture and fisheries. These presentations will be complemented by three keynote addresses, a forum discussing the CONABIO species catalog, a display of modern and fossils mollusks, and a photographic exhibit of Prehispanic shell artifacts.

On the eastern coast of Baja California Sur is a stretch of bays and beaches that remain as secluded today as when Cortez landed here in 1535. Bahía de los Sueños (the Bay of Dreams), located 35 miles south of La Paz, is an exclusive resort community that will offer waterfront custom residences, an elite fishing club, a Tom Doak 18-hole golf course, resort hotels and spas, and the tranquility that can only come from such a natural setting.
http://www.bahiasuenos.com/

THE WSM IN SPAIN

There was no rain, and we weren’t on the plain! Western Society of Malacologists’ members Dr. Ángel Valdés, my wife Rosa del Carmen Campay, and I were in Vigo, on the northwest corner of Spain (approximately 42º 13' N; 8º 45' W). Located on the south side of an elongate bay, Vigo has been a major maritime port and fishing region for centuries. Due west, guarding the bay’s entrance to the Atlantic Ocean, are the two granitic islands that form the Cíes Archipelago, part of Galicia’s Atlantic Islands Land-Maritime National Park.

We were attending the Third International Workshop of Opisthobranchs (1-4 September 2010). Our dear friend and colleague Dr. Jesús S. Troncoso (Professor in the Departamento de Ecoloxía e Bioloxía Animal, of the Universidade de Vigo) was the organizing Chairman of this international event. Fellow participants were from a diversity of countries–especially Denmark, Germany, Italy, Mexico, Portugal, Russia, and the USA. Topics covered the gamut of opisthobranch (sensu lato en extremis!) research topics, from the molecular to the provincial levels of organization and interactions. Check out the website of the Workshop: http://webs.uvigo.es/3iwo10 for more details. Clicking on the links Post-Workshop and Book of Abstracts will provide numerous photographs of the participants, and the abstracts of the oral and poster presentations.

Doing science is hard work—from the field to the lab, to writing and to disseminating the results. To ease the pain, Jesús, Vice Chairman Dr. Victoriano Urgorri, and other members of the organizing committee provided numerous spectacular social events. We had a wine and cheese Mayor’s Reception at the historic “Quiñones de Leon” Municipal Museum, a guided visit to the Museo do Mar de Galicia, and enjoyed a multi-course banquet dinner at the Royal Yacht Club, which featured local marine invertebrates and fish in gourmet local sauces. We had a nudibranch observing/collecting scuba dive, and a daylong sailboat cruise to and meander on the Cíes Islands National Park. All these were in addition to the 3 days of conference sessions.

Studying mollusks has it rewards. 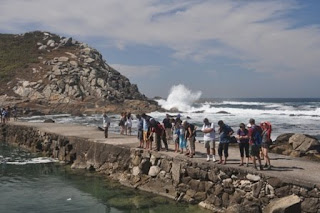 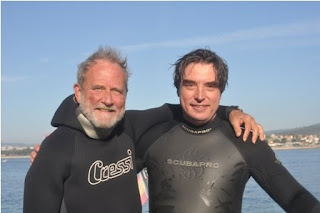 Hans and Rosa, and Jules Verne; in front of the Royal Yacht Club, Vigo 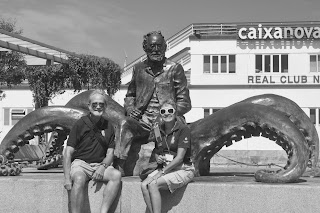 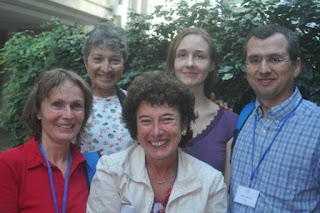 Marine station of the Universidade de Vigo and city hills 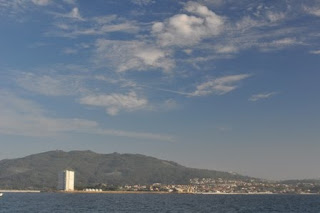 Posted by Chuck Powell at 11:33 AM No comments: 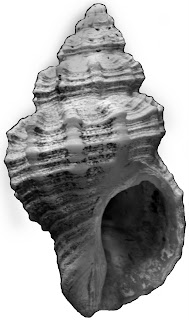 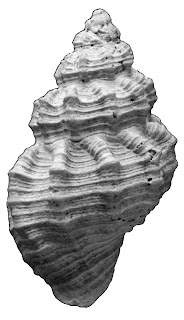 The gastropod illustrated here was collected from a shrimp trap off San Clemente Island at 700+ m in the early 1990's. It is associated with some fossil gastropods that all seem to have been brought into the trap by hermit crabs. Does anyone have any idea what family or genus this critter might belong to? Thanks.
Charles Powell, II
Posted by Chuck Powell at 2:16 PM No comments:

The SCUM meeting has been rescheduled for March 5. Same time, same place.
Posted by Chuck Powell at 2:12 PM No comments:

I plan on presenting a short talk on my work in the Carrizo Plain and Salinas Valley using mollusk to determine offset of the San Andreas fault since the latest Miocene. Many more talks and likely some more interesting will be presented - I know hard to believe. Its free, interesting, and usually lots of fun. Come and join us.

UP IN THE CHUKCHI SEA 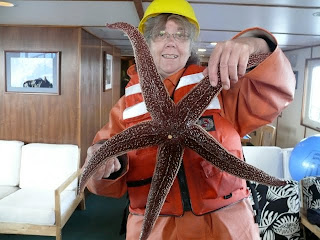 North of Bering Strait and west of Point Barrow, Alaska, lies the Chukchi Sea - home to a mix of north and west Pacific, circumboreal and Arctic marine fauna. Offshore are areas designated as possible oil lease areas, and the shallow, epicontinental sea is home to ice-dependent marine mammals, migratory whales, and birds including shearwaters, fulomars, and eiders. Small Inupiat communities depend on these resources for food and cultural identity. In August I was invited to participate in sampling to support environmental assessment of the nearshore habitats between Point Hope and Point Lay.

The jumping off point for this expedition to the Chukchi Sea is Nome on the Seward Peninsula. Getting there from Fairbanks in the Alaskan interior requires a flight first south to Anchorage then north and west to Nome. At the small crowded Nome airport, I joined the scientific party, and loaded supplies and personal gear onto a couple pickups, then we drove off through fog and drizzle to the small harbor. We met the crew of the Noresman II and settled in. During the 30 hour transit from Nome to the first sampling station, our scientific party of 10 and crew of six got acquainted, ran through drills, and refined our sampling protocols, for physical oceanographic conditions and water quality, plankton, fishes, and benthic invertebrates. My role, along with Roger Clark, was to identify benthic invertebrates, to count and weigh the catch from the beam trawl sampling.

We were favored by relatively mild temperatures and calm seas. Because of these favorable conditions, we completed three sampling stations in a 10- 12 hour day before steaming to the next day’s starting point.

The benthic invertebrate life a mix of species at their northernmost geographical range, species best known form the west Pacific, and Arctic fauna. We sorted large catches of seastars, shrimps, and ascidians as well as numerous gastropods. The Beringian area of which the Chukchi is the northwestern extent, is possibly the center for the evolution and dispersal of north Pacific Conidae- all those confusing Oenopota etc., also Buccinidae: Buccinum, Colus, Neptunea, Plicifusus, and so on. Velutina and Onchidiopsis, which are generally poorly known were encountered. In addition, we found five nudibranchs, a large red-mottled Dendronotus, a Flabellina, two Arctic species Calycidoris guentheri, and Acanthodoris pilosa. I was working with the epifauna, so bivalves seldom showed up in the catch from the beam trawl. Bivalves are mainly collected as infauna samples taken with a van veen grab.

Next year the project will continue exploring the Arctic nearshore as for as Point Barrow. Meanwhile, I’m identifying voucher specimens of rare or problematic species.

Posted by Chuck Powell at 9:30 AM No comments: